Yes! The picture shows the flaming torch on its way towards my mouth via my own will and hands. More importantly is that image contains an extremely valuable lesson that not only has dramatically changed my outlook on life (and in turn my results), but can and will help you do the same.

First let me ask you a simple question…

Has anyone ever walked you through a step by step process of something that you originally thought was something only a highly trained professional could do, only to find out after following the exact steps the expert was guiding you through, that it wasn't anything magic or super complicated at all. It was simply a series of steps that would produce the EXACT SAME outcome EVERY TIME by ANY ONE who took those steps?

If your answer was, “Yes!” I've experienced that,” good. You get it.

If you are racking your brain trying to recall a scenario that fits that description, yet can't seem to locate one, that's fine too. Stick with me.

Picture if you will the photo above of me “eating fire” (about to eat fire, actually, according to the still shot) with my expert guide, The Millionaire Maker, Marshall Sylver, by my side ensuring my success.

Would you agree that if you see that picture and it inspires you to say, “You know what? I want to eat fire right NOW!” that you would most likely have a high chance of doing it improperly and being seriously injured?*

*Assuming that you have never done this before (with proper guidance) or seen anyone do this, and you don't know the proper process.

Is that a fair assumption? If you were to try to eat fire without knowing how to do it properly you could risk being severely injured?

On the same train of thought, if you were to be trained and guided by someone who has done it successfully for themselves and for thousands of others for decades with ZERO injuries EVER, and that expert not only demonstrated it for you, then talked you through it step by step via a dry run, THEN had you tell them to LIGHT IT UP, and just as before spoke you through and guided you through it with an ACTUAL FLAME, do you think you could not only do it, but do it with almost zero chance of failure?

PHEW! Is your heart racing just thinking about this scenario? Because MINE IS!

Back to the scenario. You would agree that with the expert guidance you not only will achieve it just like everyone else has, but you will do so with absolute minimal to no chance of failure or injury, right?

Great! Because that is EXACTLY how I ate the fire, and would not only NEVER have even attempted it on my own, but if for some whacky reason I did I could pretty much guarantee that I not only would have failed at doing it properly, but most likely would have severely injured myself in the process.

So you're with me on this, right? Makes simple and perfect sense, correct?

Here's the break down for Eating Fire…

Without the proven expert guidance = 100% Failure AND Severe Injuries Guaranteed

What if I told you that if you replaced eating fire with earning $1 million, it is the same principles and processes and follows the same path with and without that expert guidance.

Would you rather figure either of them out on your own, or would you rather have that expert who has walked thousands before you successfully and skillfully to the desired outcome to be there by your side? Which would you prefer?

Friend, I have fantastic news for you, as Marshall Sylver is that guide who yes has walked thousands to not having a clue or desire to eat fire to do so, do it, AND also has taken thousands to financial success that most had no idea or clue was lying within them, to become their reality.

He has a life changing training available for you for FREE that is presented in a manner I can GUARANTEE you have never seen before in an online training, as it is conducted in front of a LIVE audience in his 17,000 square foot home in Las Vegas, called Prosperity Palace, and YOU are invited as a guest via this incredible online webinar experience HERE.

PS – If you were a smoker and Marshall could hypnotize you to be a non-smoker (he's done it many times in one session that has lasted for decades/life) would you do it?

If you were overweight and Marshall could hypnotize you to create habits that would lead to lasting weight loss with higher energy, and confidence, would you do it?

What about if you wanted to be a Millionaire? Or add millions to your already successful results? If Marshall could hypnotize you and make that a reality, would you do it? 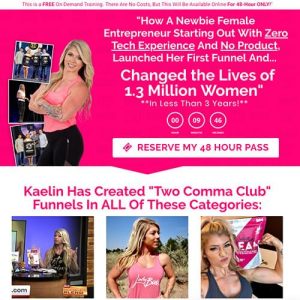 I am an independent ClickFunnels Affiliate, not an employee. I receive referral payments from ClickFunnels. The opinions expressed here are my own and are not official statements of ClickFunnels or its parent company, Etison LLC.